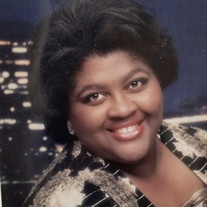 Lottie Mae Lee-Davis was born August 11, 1958, in Wilmington, DE. to the late Berdine R. Lee and the late Essie D. Lee. She departed this life to be with the Lord on Friday, September 18, 2020 in Wilmington, DE. Lottie grew up in Dunleith... View Obituary & Service Information

The family of Pastor Lottie Mae Lee-Davis created this Life Tributes page to make it easy to share your memories.

Send flowers to the Lee-Davis family.