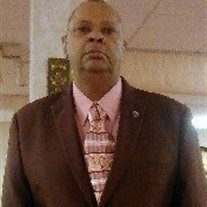 John Paul Jones life’s journey ended suddenly at home, January 22, 2021 surrounded by family, after a minimally invasive surgery. John was predeceased by his mother, Delores Jones; father in love, Jesse W. Hamlin, Jr. and granddaughter, Demirria Harris John was born September 1, 1955 in Chicago, IL where he received his early education in Catholic School then to Waller High School graduating in 1974.  He was inspired living life to the fullest while being saved and safe in the knowledge that Jesus died for our sins.  John lived his life with values to be the very best provider he could be to his wife, as her caregiver, daughters and especially his grandchildren.  He exceeded in this area! Shortly after his arrival in Delaware, in 1999, he met the love of his life, Jessettia as he affectionately called her although she was commonly known as Puddy.  He was persistent to say the name of his choice as he would introduce her as such. He worked and enjoyed automobile mechanics prior to computerized vehicles.  Finding employment for anyone seeking a job was a task he found joy in completing and surprisingly was successful in this arena.  Always helping others when needed and if he didn’t fuss, he did not care. “Yo, Yo, Yoo, I’m from Chicago..” was his infamous quote.  Staying loyal to his Chicago Bulls & Bears professional sports teams and if you thought your team was better, no talk was necessary, “put up or shut up” is how he expressed it. Donald Cunningham, Rashawn Lowe, Adrien Barnes, Robert Sorden and Arthur Lebedinikas were John’s good friends and life-long brothers.  He was loved by many and will truly be missed. John leaves to cherish his many memories, his wife, Jessettia well known as Puddy, 3 daughters, Monica Heffner, Johana Harris, both of Chicago, IL and Maria Sudler, 3 grandchildren Elijah Sudler, Alaia Sudler and Jomari Thomas, 1 brother, Lawrence Jones of Chicago, IL mother in love, Evangelist Ernestine Jackson, brothers in love, James “Pippy” Allen, Derrick Hamlin(Harriette) of Canton, MS, Vandrick Hamlin, Sr.(Cynthia) and Kurtis Hamlin; sisters in love, Clarisa Luckett of Detroit, MI, Alycia H. Benson and Christine Blackledge, nieces, nephews, aunts, uncles, cousins and many friends.

The family of John Paul Jones created this Life Tributes page to make it easy to share your memories.

Send flowers to the Jones family.