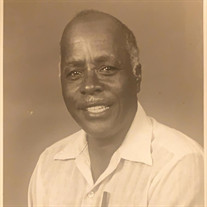 It’s not often that life brings us someone as special as James J. “Jim” Baker. We were fortunate to have known him as Daddy and privileged to be his children. We all loved him so in life, so let us not forget him after death. Death is merely the transcendence of our soul; the essence of the spirit will live on forever. In his home of over 60 years, Daddy peacefully transitioned into eternal rest on March 21, 2021. While he will be greatly missed, we rejoice in knowing he has been reunited with the family and friends he so deeply loved. His journey began on December 6, 1924 in Greenwich, CT. where he was born to Nellie and James Baker. The couple would have 2 more children, Beulah (Sis) and Marjorie (Babe). Daddy often shared stories of his childhood. They weren’t memories of a white picket fence and a perfectly manicured lawn. He spoke of the challenges associated with poverty. Issues ranged from not having enough to eat to walking to school in shoes that were too small for his feet. He’d recall standing in food lines as a very young boy with his mother during what he would later learn was the Great Depression. As the oldest he was extremely close to his mother and spoke fondly of their time together. The most memorable, riding his mother to work on his bicycle. When he returned, she’d reward him with a special treat. His mother, a housekeeper, would gather left-over desserts from the day to share with her Jimmy before they head back home. Daddy would drop out of high school to work and financially help his mother. He lost his father to illness when he was just 14 years old. Not once did he ever speak negatively about his upbringing. Each story was told with love and without resentment. Our grandmother Nellie later married Raymond Smith. Their union resulted in the birth of Raymond (Duke) and Carolyn. As a young man, Jim continued to work and help his family. He spent his spare time just hanging with his friends until the day until he enlisted in the Army to serve in World War II. He was deployed to Okinawa, Japan and for the first time in his life, away from his family. There he witnessed the devastations of war, villagers struggling to find food and shelter. Even though he was in enemy territory he empathized with the innocent. His kindness transcended across seas, sharing food from the mess hall to feed some of the nearby families. He said it was then that he made a commitment to help those in need, and never see anyone hungry. When he returned home not much changed in his neighborhood. That is until one day a young boy handed him a flyer. The promotion was something he couldn’t pass up! New home construction for World War II veterans. For $25.00 down, and a monthly mortgage of $39.00 he would have a new house, a fresh start. This bachelor moved from his hometown of Chester, PA to Dunleith, a small community in Delaware. Not only did he find a new home, he found love with his next-door neighbor Leone (Lynn). A beautiful woman with two young boys, Ira (Wayne) and Stanley (Bruce). The oldest, Wayne liked to hang out with Mr. Jim. The two would sit on the steps and people watch, go out to breakfast and grab an occasional dinner at the local diner. It seemed preordained that the two boys would be blessed with not one, but two fathers. The friendship between Lynn and Jim led to marriage, the purchase of a new house in Wilmington, DE and the addition of two more children, Susan (Sue) and Patricia (Pat). Daddy’s consistent presence was the glue that bonded our family together. He taught us that the bond that links a family is not one of blood, but of respect and love for each other. There is a saying ‘time and tide waits for no man’, and daddy would reach yet another milestone in his life. On December 31, 1987 after 32 years, daddy retired from DuPont Edgemoor as a heavy equipment operator. However, in typical Jim Baker style he started working part-time until his youngest completed college. His commitment to family was simply unsurpassed. Daddy needed no interview for his next job. He was perfect for the position of ‘pop-pop’. The grandchildren and great grands loved spending time at the house. In fact, they never wanted to go back home! A visit with pop-pop was a grand adventure. First, a trip to McDonalds, then to Boscov’s to pick up a new toy, coat or shoes. But the most exciting adventure was a walk to Rash’s market. This local market was a treasure trove of candy bars, soda and chips. No matter the weather, you could find daddy sitting at Rash’s or the gas station with his cup of coffee and newspaper. He was a constant staple at the store, always in stock and great demand. Greeting all that walked in with a smile, everyone knew Mr. Baker. He’d give hand-outs to those that asked, never judging anyone for their circumstance. He just genuinely wanted to help others and never once thought about his safety. We know that God protects the vulnerable and kept him safe all these years. His catch phrase ‘hey buddy’, ‘ok kid’ and ‘alright…alright’ will be forever missed throughout the community. Fun fact, daddy continued to legally drive until December 12, 2020. He would run errands, make egg salad sandwiches and pick the coolest action movies to watch. All at the youthful age of 96! He was proceeded in death by his wife, Leone “Lynn”, son Stanley “Bruce” Spencer, sisters Beulah Thomas and Marjorie Lee. He leaves to cherish his memory children, Ira W. Spencer Sr. (Rowena), Dr. Johnny M. Hunter, DD (Patricia), Susan F. Edwards (Roger) and Patricia L. Williams, brother Raymond I. Smith, sister Carolyn E. Lawson, and a host of grandchildren, great-grandchildren, nieces, nephews, cousins and friends.

It&#8217;s not often that life brings us someone as special as James J. &#8220;Jim&#8221; Baker. We were fortunate to have known him as Daddy and privileged to be his children. We all loved him so in life, so let us not forget him after death.... View Obituary & Service Information

The family of James "Jim" Baker created this Life Tributes page to make it easy to share your memories.

It’s not often that life brings us someone as special as James...

Send flowers to the Baker family.