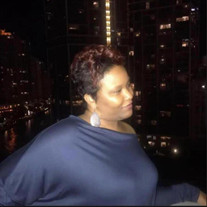 An angel is on her way to heaven and her name is Jamaris Nichelle Maynard. She was born October 31, 1975, to Veda and the late Clement Maynard. She departed this life peacefully, on Sunday, March 27th, surrounded by her loving family. Her faith was deeply seated in Christ as she accepted Christ as her personal savior at the age of 12, and was baptized at Union Baptist Church in Wilmington, Delaware. "Maris", as she was affectionately known, was educated in the Wilmington Public Schools, and Ursuline Academy. During her high school years, she participated as a debutante in the Alpha Kappa Alpha Inc., Debutante ball, and was a contestant in the "Miss Calendar Girl" Pageant of Delta Sigma Theta, Inc. She graduated from Concord High School in 1993. After graduation, she attended Morgan State University. While at Morgan, Maris participated in the internship program at Walt Disney World, in Orlando, Florida. She subsequently enrolled in the University of Delaware, where she earned a Bachelor of Science in Hospitality. Her love for fine dining lead her to a managerial position in The Green Room of the Hotel DuPont, in Wilmington, Delaware, and the Aramark Company in Philadelphia, Pennsylvania. She was always willing to share her expertise in this area. Jamaris especially enjoyed teaching the art of fine dining to the culinary arts students at Howard High School of Technology as a volunteer. As she continued to seek professional growth opportunities, she began a career in retail, where she held many managerial positions. Her most enjoyable career, until her health declined. According to her co-workers, Maris was known to make it happen. Because of the generosity of the Nordstrom Co., she was able to create care packages after requesting products from every Nordstorm store and she donated them to the cancer patients at the Helen Graham Center. She made an impression on everyone she met and always greeted you with an infectious smile. Jamaris loved socializing ad interacting with her nieces, many friends, and co-workers. She especially loved spending time with family and traveling with her dear friends, Nicole Howell and Marlo Zappley. She also loved watching football, whenever the Dallas Cowboys were playing, listening to music by prince, and her favorite color was purple. Maris was preceded in death by her father, Clement D. Maynard, grandparents; Howard and Lou Birda Dodson and Conrad, Sr. and Iona Maynard. She leaves to cherish her memory, her loving mother; Veda Maynard, her sister; Jeanine Maynard, nieces Jezelle and Milan Banks, her beloved dog; Bentley, aunts; Elaine Mathis, Barbara Marshall (Donald), Linda Hall, Deborah Griffin (Eugene), Shelley O'Laughlin, uncles; Howard Dodson (Carol), Joseph Dorsey, Conrad Maynard, Jr. (Yvette), special cousins; Alyce Emory, David Dodson (Maria), Aaron Mathis, Sean Marshall, Tyson Hall, OntKean Maynard (Christina), godson; Christopher Zappley, special friends; Nicole Howell and Marlo Zappley, godparents; Vincent and Istrelda Agnew, and a host of other relatives, colleagues, and friends.

An angel is on her way to heaven and her name is Jamaris Nichelle Maynard. She was born October 31, 1975, to Veda and the late Clement Maynard. She departed this life peacefully, on Sunday, March 27th, surrounded by her loving family.... View Obituary & Service Information

The family of Jamaris Nichelle Maynard created this Life Tributes page to make it easy to share your memories.

An angel is on her way to heaven and her name is Jamaris Nichelle...

Send flowers to the Maynard family.