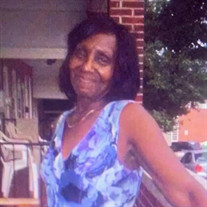 ETHEL MAY MORRISON – NICHOLS was born in Fayetteville, North Carolina on April 29, 1951,and went home to be with her Lord on November 13, 2021. Ethel graduated from P.S. High School in Wilmington, Delaware. Ethel was employed with SaintFrancis Hospital for 20 years and transitioned to Christiana Care being employed for 23 years while working as the textile services supervisor. Ethel retired from Christiana Care in November of 2020. Ethel was an extraordinary woman; she loved life and touched the heart of everyoneshe met. To know her was to love her. If you were hungry, she fed you, if you were having a problem she listened, if you were in need, she did what she could to help. Ethel was humble, sweet, loving, kind and most of all wise. Some of the many hobbies she enjoyed was gardening, shopping, cooking for family and traveling to North Carolina to spend time with her brothers and extended family. Ethel loved the Lord and is proceeded in death by her husband Alexis D. Nichols, her motherJerleen Morrison, her father Lonnie Morrison Sr. and her brother Lonnie (Don) Morrison Jr. Ethel is survived by her brother Alfred (Darlene) Morrison, Rickey (Deborah) Morrison; six children, Jennifer Morrison, Audrey Morrison, Angela (Tommy) Morrison, Michael Morrison,Eric (Tamu) Morrison and Shawn Morrison, Meredith Nicholson who was a second mother to her, and a host of grandchildren, great grandchildren, nieces, nephews, cousins, aunts and uncles. The family extends special thanks to her Christiana Care family, our mother always considered Christiana Care as her home away from home. Tony and Olga, (which were common names in our house) we would like to recognize and thank you for always being there for our mother.

ETHEL MAY MORRISON &#8211; NICHOLS was born in Fayetteville, North Carolina on April 29, 1951,and went home to be with her Lord on November 13, 2021. Ethel graduated from P.S. High School in Wilmington, Delaware. Ethel was employed with SaintFrancis... View Obituary & Service Information

The family of Ethel Morrison- Nichols created this Life Tributes page to make it easy to share your memories.

ETHEL MAY MORRISON – NICHOLS was born in Fayetteville, North...