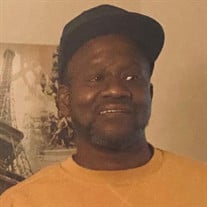 Earthell Frazier, son of the late Johnnie Sr. and Willie Mae Frazier, was born January 26, 1956 in Wilmington, Delaware. He gracefully departed this life on Saturday March 27th, 2021, surrounded by his love ones at St Francis Hospital. Earthell was known to many as “Cloudy”, “Ert” and the one and only “EARTHELL FRAZIER”. He received his education in the public schools of Wilmington, Delaware. Growing up he attended New Calvary Baptist Church. He enjoyed working with his hands and was a skilled masonry and carpenter. He spent the last 20+ years as an independent contractor specializing in home remodeling and landscaping. His work spoke for itself. “Ert” lived a fulfilled life. He was a loving, caring, and compassionate person with an affectionate smile; to know him was to love him. He enjoyed watching football but unlike most fans he loved two rivalries “Dallas Cowboys and Washington Redskins”. Earthell loved a good homecooked meal. His sister’s neckbones and lima beans were one of his favorites. “Ert” enjoyed spending time with his family. You could catch him at family functions tearing up the dance floor and singing karaoke with his nieces, somewhere in the corner fussing with his sisters or cutting up at the dinner table with his brother. Family functions were not complete unless you heard about his “Tribulations and Trumalations” and making it known while beating on his chest“That There Is ONLY One EARTHELL FRAZIER ”!!!!!!! He was preceded in death by his parents Johnnie Frazier Sr. and Willie Mae Frazier, two brothers George Edward Bradley and Donal Frazier.He leaves to celebrate his life, 2 beautiful daughters Shanna and Shante Hallmon, a loyal son A’Keem Cropper of Wilmington, DE; 5 precious grandchildren Jyair, Shayonna and Kamiyah Hallmon, Warren Wideman and Jada Walker of Wilmington, DE; 3 caring sisters Ruth Frazier, Sharon Hunter and Brenda Frazier-Hampton of Wilmington, DE; 1 devoted brother John Frazier Jr. of Las Vegas, NV; 2 loving aunts Lucille McManus and Dorothy Bradley Wilmington, DE; 34 nieces and nephews which include devoted nieces Wanda, Meeka and Sunnie and nephew Andy and his partners in crime Sierra, Marques, Nye, Josh and Fay; a special friend and a host of cousins and friends including his Pressey family that loved him.

The family of Earthell Frazier created this Life Tributes page to make it easy to share your memories.

Send flowers to the Frazier family.